If you are familiar with the term VPN and its usage then for sure you might have heard about the iTop VPN. Users want a highly secure VPN for gaming and streaming with higher privacy then they check out for an honest unbiased iTop VPN review.

So here you got it, After proper testing and research on iTop VPN. we have shared our thoughts in this Review, which definitely helps you to make a better purchase decision.

Just read out once all about iTop VPN like its features, pros, cons, Is iTop safe to use, Is iTop VPN good, does its support streaming and torrenting, etc. 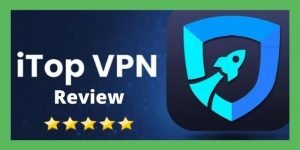 According to our research we gives you an genuine iTop VPN Review & it is safe to use. You can also know about the features, pros, and cons.

iTOP VPN  is a very fast and secure VPN. With the use of this VPN users can easily access or stream movies, series, etc. With the use of it, everyone can access all games like Pubg, Freefire, and Fortnite and it also allows you to operate all social media platforms like Instagram, Whatsapp, Messenger, and so on. If you are using then you don’t need to worry about your online data or information.

iTOP VPN provides various features in its Free and paid version. But in the iToP VPN free version, you might face some limited features and paid version allows you to access all the features of this VPN without experiencing any problems.

After a lot of testing, we mentioned the most honest iTop VPN Review which helps you to learn about the various important features of iTop VPN. I hope it might be helpful for you.

To provide real and genuine information we have shared the pros and cons in this review of iTop VPN.

The best iTop VPN plan is 2 year, user can get iTop VPN at just $2.60/mo for first 2 year. This will save upto 80% off. In this Plan, you are able to unblock all gaming sites easily and can able to hide your IP address. But if you are new to using VPN then you can take the 1 Month plan because In this plan you will get the money-back guarantee.

How to Get iTOP VPN?

By following some easy and simple steps you can download iTop VPN at.

It is supportable with all devices like Windows, iOS, Android, and many more devices. It can secure your information or data from a third party and in the paid version iTop VPN gives you advanced features which are best for your online privacy. It is the best VPN Service provider.

Is iTop VPN Good For Streaming?

Yes, iTop VPN is good for streaming because it helps you to easily access or unblock all streaming sites like Netflix, Amazon videos, BB, Videos, and many more. When you are using this VPN then you don’t have to be worried about your online information. It keeps your online information or browsing private from outer attacks. With the use of iTop VPN, nobody can track your activity. It also helps you to access all countries’ streaming sites without facing any issues.

Yes, iTop VPN provides a free version but it has only limited features. If you are confused between the iTOP VPN paid or free version of it then don’t worry because down below We also mention the difference between its paid and free versions which helps you to take the right decision between both them.

What Is The Difference Between Paid Or Free Versions Of iTop VPN?

According to our research, we give you an honest iTop VPN review about its paid or free version.

Is The Free Version Good For You?

I think the free version is might be good for those people who don’t want to spend their money. In the free version, you are not capable to access any gaming or streaming sites properly. If you use the free version then the chances are increased to expose your online information. Some time free version can leak your IP address. But this VPN said that this is the fully trustworthy free Version  of iTop VPN.

Is It Good For Gaming?

After testing to play games we give you an honest iTop VPN review. It allows you to access all restricted games easily in your country without any problems like Pubg, Firefox, Cod, and Fortnite. It is capable to change your IP address. With the help of this VPN, you can easily unblock all games without any hassle.

Is There Any Alternative To iTOP VPN?

Yes, there are three alternatives to iTOP VPN we have found in terms of discounts, pricing and features which are listed below:

In the above part, we mentioned the features, pros, and cons of a iTop VPN which can help you to make the right decision between a free or paid version. We suggest you buy the 12-month plan of this VPN with 65% Off where you get extra privacy and lots of features. In paid version it allows you to access all streaming sites without any hassle. So, according to our testing & report, we found that iTop VPN is safe to use and provides the best speed with full privacy.