When it’s come to the VPN, we meant security, privacy, and trust. The money you are spending on a VPN should be worth spending. Turbo VPN is an app that is available on the play store. This app lets you browse the internet without showing your real IP address or location. With this app, you can get into any country which may have imposed restrictions. The uniqueness of this app is you don’t have to register on it or agree on any terms and conditions. It will start with just a tap. I will give you a complete review of the Turbo VPN and will tell you whether this Turbo VPN gives you full security as you want or is it able to fulfill all your meet.

Turbo VPN is a china based service. It is mainly used in mobile or we could also say that it is a mobile-only VPN. The VPN has been downloaded by around 50 million people. It provides free services to users without any limitations. This VPN does not work on desktop appliances. Turbo is very famous for Android and iOS.

What is a VPN?

A VPN is a virtual private network, which hides your IP address to prevent it from hacking and spamming. It creates a tunnel between your device and your internet connection which, encrypts all your data and traffic. With the help of some of the best VPN providers, you can browse anywhere across the country. It enables you to watch all online streaming that is restricted to your country. If you use the public free wi-fi there are many chances that your data, traffic, and your credentials.

Features of a Turbo VPN 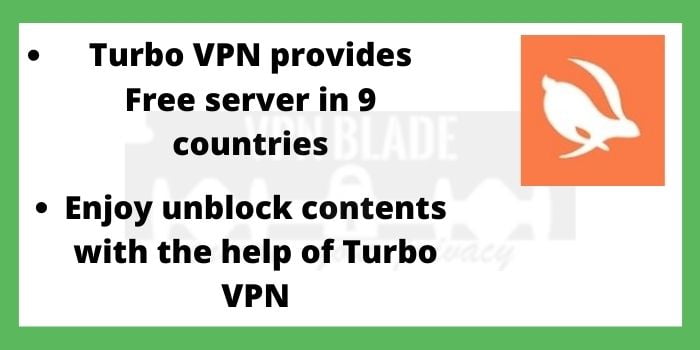 Pros of a Turbo VPN

Like other free VPN Turbo VPN is much better. It provides more security than other Free VPNs and also has a good track on the free leak. It also provides some servers that work with Netflix Let have a look at the other features too.

So, now have the basic knowledge of this Turbo VPN it is clear that it is for mobile use only. After testing its speed performance on the online tools what I found is, it slows down the speed of your internet connection to half.

This VPN provides free service and also a 7days free trial of a VIP service. They offer $11.99 per month or get a yearly subscription of $2.99 per month for the same.

Yes, Turbo VPN supports macOS, Windows, iOS, and android however there is no official release for the PC system. But, there is an easy trick by that you can run the app on your PC system.

Steps to download the Turno VPN for Windows PC

After reviewing all of it, what I found is, as a free service this VPN is really good and useful. It unblocks the content. This VPN does not target your browsing habits. But, it has a limitation as well as its privacy policy clearly states that the advertiser can insert the cookies into your browser to collect your data. The other things about this VPN are amazing which you cannot ignore at all.

But, due to its poor performance and poor customer support, I can not refer to its paid subscription. Yes if you want to unblock some blocked content this VPN may become very useful for you.

As it clearly states that in its privacy policy the advertiser can insert the cookies in your browser to collect the data. This could be a little risk-taking as it keeps an eye on your browsing behavior and their customer support isn’t that good so trusting this turbo VPN is doubtful.